Museums are institutions characteristic of their specific cultural and historical value. For centuries museums have been in the center of human interest. How does it come that phenomena like this never ceased to be out of people’s interest? The answer lays in the fact that museums provide the visitors with insight into the art and lifestyle of numerous historical periods.

The following list contains the 8 best museums worldwide in 2023.

This second largest museum in the world was founded in 1746. Its collections are said to include more than 3 million items. The Hermitage offers its visitors everything – from Egyptian antiques, classical antiques, prehistoric art, jewelry and decorative art, Italian Renaissance, to Russian art. Experts say that a visitor cannot see the entire collection of this museum in a day.

Therefore, if you are interested in visiting, you should take into consideration the vast choices this institution offers.

The Rijksmuseum, in the Netherlands, was founded in 1800 in Hague. Its collection revolves around Amsterdam’s art and history. This Dutch national museum offers a collection of 1 million items. Moreover, these objects are significant either artistically or historically. The time frame of the collection occupies the long period of 800 years. Also, the fascinating 8000 objects are on the display currently. In case you are interested in visiting this Dutch museum, you will not regret it.

3. The British Museum, London, the UK

The long history of The British Museum begins in 1753 when it was founded. Its collection is mainly focused on human history, as well as art and culture. Furthermore, this collection includes more than 8 million items. This museum is considered to be one of the biggest museums in the world. With its collection including items from the period of prehistory, Ancient Greece and Rome, and of course, items belonging to the history of Europe, and Britain, The British Museum is considered to be the first national museum in the world.

The Tokyo National Museum is considered to be the oldest Japanese national museum since it was founded in 1872. Its collection is centered around items significant to the art and history of Asia, more specifically Japan. Also, this museum holds in possession of more than 110 000 items.
Moreover, the visitors are thrilled with the educational events Tokyo National Museum offers.

Therefore, if you are fascinated with Japanese culture, the Tokyo National Museum is definitely not going to disappoint you.

When talking about museums, it is inevitable to mention the world’s largest museum – Louvre. It comprises items from the prehistory all the way to the 21 century. Louvre was founded in 1793. The total number of objects in its collection surpasses the number of 38,000. The fact that this museum is one of the biggest tourist attractions is proven by the statistics – it was the most visited museum in the world in 2018. It was reported that 10.2 million people visited it during the whole year.

6. Metropolitan Museum of Art, New York City, the US

This museum, also known as the Met, was founded in 1870. Its collection revolves around the astonishing 2 million items and includes objects belonging to the history and art of Africa, Oceania, and America. Furthermore, it includes Asian art, as well as European paintings and sculptures. With more than 6 million visitors per year, the Met is considered to be the third most visited museum in the world. It is safe to say that the Met is an unavoidable destination if one is to find themselves in NYC.

The Prado Museum was founded in 1819. It is the main Spanish national museum. Its collection occupies the vast period of 8 centuries – from the 12th to the 20th century. Also, The Prado Museum has the reputation of one of the greatest art museums in the world. With more than 2 million visitors per year, it is considered to be very popular in Spain, as well as worldwide.

The Acropolis Museum in Athens was founded in 2003. It holds more than 4,000 objects in possession. This museum is the main tourist attraction in Greece, since it, through the remarkable items, provides its visitors with an insight into the art and history of many periods. It is believed that more than 1, 500, 000 visitors enjoy the display of this museum annually. Therefore, if you are in Athens, and want to learn about ancient history and art, the Acropolis Museum is the best place for you. 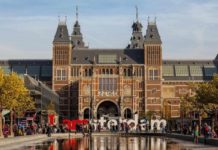