Painters are generally known for their innovation and artistic decoration of canvasses, creating fascinating paintings. As photography advanced, instant portraits were made more convenient, thereby attracting more painters to practice photography and work for commissioned pieces; however, other painters stuck with their inspirations.

Here we’ve successfully compiled answers to your search on the most famous American painters of all time.

Gilbert Stuart was born in the year 1755 and was the leading American portraitist of his generation and specialized mainly in painting portraits. He painted President John Adams, President Thomas Jefferson, and President James Madison. He also painted European Royalty, such as King George III of England and King Louis XVI of France.

Of all his paintings, the incomplete art of George Washington stands out as the most famous. The painting, which he started in 1796, was meant to be the portrait of the first President; however, Stuart completed only the head and face. Notwithstanding, it got so iconic and has adorned the one-dollar note for over a century. Stuart lived and worked in London, Dublin, New York, Philadelphia, before his death in Boston in the year 1828.

Born in 1826, Frederic Church was one of the artists that helped shape the country’s view of their landscape. Church belonged to Hudson River School, a 19th-century American art group of landscape painters. His landscape paintings include the Catskills, Niagara Falls, and the coast of Maine. He also painted views of exotic regions around the world, including the Andes Mountains and the Aegean Sea. He passed on in the year 1900.

Whistler was a prominent artist in the 19th century, creating iconic portraits, including his mother’s. Born in the year 1834 in Massachusetts, Whistler grew up in St. Petersburg, Russia, and had entered West Point in the year1851, but got expelled by Robert E. Lee.

He controversially sued John Ruskin for his critics but lost the case and was forced to bankruptcy following the huge legal fee he paid during the trial.

He also got into entanglements with Oscar Wilde as well as Frederick Richards Leyland, a patron who contracted Whistler to design his dining room but got enraged by the result.

Whistler’s irritability didn’t deter him; however, from getting recognized as he was honored on an American postage stamp in 1940. He died in 1903.

Born in 1844, she studied in Philadelphia at the Pennsylvania Academy of the Fine Arts and moved to Paris in the year 1866. Cassatt’s paintings initially identified with impressionism, but later, her style changed for the fashion in France. By 1914 she got visually impaired and couldn’t continue painting. She passed on at Château de Beaufresne in 1926.

Sargent was born in 1856 and spent most of his life living and working in Europe. He painted mainly portraits of high ranked subjects from New York, Boston, London, and Paris. His most famous painting is “Madame X”- a full-length painting of a French banker’s wife. She wore a black gown that contrasted with her revealing body parts.

The masterpiece was unveiled at the French Salon of 1884, with prominent sitters like Presidents (Roosevelt, Theodore, and Woodrow Wilson) as well as John D. Rockefeller. Sargent passed away in 1925.

Born in 1882, Hopper used his paintings to reveal isolation in modern life. His paintings like Nighthawks, Automat as well as Office in a Small City capture tranquillity caused by depression. His landscapes suggested a purgatorial America and limitless space. Hopper passed on in 1967.

Mark Rothko A.K.A Markus Yakovlevich Rothkowitz was born in 1903 to a Russian Jewish family who migrated to America when he was still tender.

His career in arts included different styles, including surrealism, before he formed his trademark style. Rothko is regarded as the originator of Color Field painting, an abstract style that uses color as the main subject. Though he was considered a top abstract artist, he opposed that abstract was his style since his main interest was discovering arcane aspects of colors. Rothko used his paintings for spiritual expressions, and many observers were reduced to tears. Mark Rothko passed on in 1970 and will be fondly remembered for his contribution to abstract art.

Born in 1887, O’Keeffe paintings were seen by many as subtle paintings of vaginas, an idea she rightly denied as her works aimed at striking a balance between abstraction and representation and not sensualism as people thought. She had a torrid marriage to Alfred Stieglitz, a photographer, and gallerist, due to his infidelity. Nevertheless, her artistic career was more successful than his. Although he captured scenes were mainly from different locations in the United States, O’Keeffe’s works were associated more with New Mexico, where she lived and worked between 1934 and 1986 before her death.

Born in 1912, his breakthrough was impeded by alcoholism, low-confidence, and ineptitude; however, he briefly overcame his flaws between 1947 and 1950, creating drip painting that carved his name in the book of America’s most famous painters. He lays his canvases on the floor against the conventional use of easel and used the ‘action painting’ technique where he used paint straight from the can while he flung and dribbled thin drops that recorded his movement on the canvass. He died in 1956.

Warhol was born in 1928. He took the pop style from the art world to the fashion and celebrity world. He paid interest in commercial art with his famous phrase, “Making money is art,” which encouraged artists to tap into the lucrative side of art. His famous paintings include Marilyn Monroe, Campbell’s Soup, and Eight Elvises; however, his most iconic creation was himself. 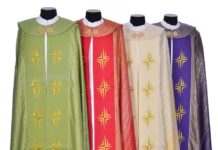 What do Church Vestments Symbolize?