Today, as the world progresses, the enduring dominance of technology seems endless. Automation has taken over almost every industry: be it automobiles, banks, or hospitals, each aspect of our life depends on programming. This influence has led to a significant rise in demand for software engineers. “There’s never been a better time to be a software engineer,” says Jon Bischke, the CEO of tech recruiting firm Entelo.

According to pay scale, Employees with Software Engineer in their job title in San Francisco, California earn an average of 39.5% more than the national average. Forbes has rated software engineering the fourth-best college degree in terms of short term and long term return on investment.

As the statistics and information from Research Prospect portray, programming appears to be a secure and stable career, thus compelling many to opt for it. In light of this, several programming languages have been developed in the recent past. Now, as we have various options, the real dilemma is to determine the best path to get on the road. You don’t want to end your effort in smoke by mastering in an obsolete programming language.

Besides being one of the most prevailing computing languages that have ever existed, Python is utterly simple, easy-to-learn, and considerably a powerful language. It has served as a development tool for some widely used web applications like YouTube, Instagram, Pinterest, and SurveyMonkey. It can also be seen dominating the universe of scientific computing, machine learning, big data and data science.

You might argue that applications of a language are not enough to make it top the list. I agree! For me, it’s not the extensive use of the language that makes it better; rather, it’s the ability of that language to make us use it at such a large scale. Let me explain this with an example. Python, a language that first appeared thirty years ago, has convinced the programmers to adapt it while developing for the modern and booming fields of artificial intelligence and machine learning.

This popularity promises you to land a programming job easily or opt-out for a flourishing freelancing career.

An object-oriented language that has been ruling the programming world for the last twenty years. If you already have had ice-breaking with Java, this phrase might sound familiar to you: “Write once, run everywhere”. Java Virtual Machine(JVM) enables us to execute our code at any platform, independent of the device we used for coding, making Java highly platform-independent.

An undying obsession with smartphones that have taken over the universe has escalated the use of the Android Operating System(OS). This OS is primarily based on Java, thus escorting this language to be the most popular one for developing mobile apps. Despite its age, Java is an incredibly stable and immensely flexible language when it comes to the development of complex business applications.

On top of this, the biggest sensation of Big data, Apache Hadoop data services, run by Apache Hadoop and Microsoft Azure, has also been developed in Java. It is my all-time beginners’ favorite because of the abundance of open-source libraries it encompasses. Unlike other computing languages, Java does not compromise on security whatsoever, due to the exclusion of explicit pointer and inclusion of a security manager responsible for defining the access of classes.

Tackling the modern problems with galore of API’s and multithreading support, Java tempts you to master it for a promising career.

These days, it seems impossible to be a software engineer without having an introduction with JavaScript. For those of you who are assuming that as JavaScript has Java in its name, they both are somehow related, well …No! As they say,” Java is to JavaScript as ham is to a hamster”. However, many argue that this confusion is part of a marketing gimmick.

In the early days of the internet browser, a developer name Brendan Eich at Netscape, Inc managed to create a language that enables a computer to directly interact with the user upon receiving input. This language ended up being named as “JavaScript”.

JavaScript is light weighed, multi-paradigm programming language. Primarily, it is used in designing interactive web-pages, making it popular among developers who need to work on server-side and client-side programming. Common web frameworks AngularJS, Node.js, and React.JS, are based on JavaScript. Today’s world-famous websites like Google, Wikipedia, YouTube, Facebook, and Amazon have their front-end made in this language.

The 2018 Developer Skills Report by HackerRank shares that JavaScript is the top programming skill required by companies today.

Contrary to other client-side languages, JavaScript is incredibly fast due to its ability to run without compilation. It also works exceptionally well with other programming languages. The average salary of a JavaScript developer in the United States is around $110,981 per year.

Being an undoubted hit in the IT domain compelled me to put JavaScript to number three of my list.

As a Tech giant of our era develops it, its popularity and community support are escalating. A study of the top 110 apps on the app store showed that 42 percent of apps are already using Swift.

Codes in swift are near to English, thus making it simpler to grasp. If you are a newbie and willing to develop mobile apps, you would want to have a look at this language. 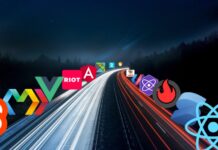