This year, the BLAST CS:GO fall tournament 2023 will conclude on December 18th with a major boom. Eight top CS:GO squads from all around the globe will compete for a prize pool of $1,000,000. The event has already revealed its six participants, and only two spots are left to decide.

So, today, let’s look more closely at the teams that have a chance of claiming two final spots to qualify for the BLAST Premier: World Final later this year and give our betting advice. We will speak about the results of the Fall Final as well, as it may influence the decision. So, without further ado, let’s get started!

Brief Intro About the Tournament

BLAST Premier: World Final is the last BLAST tournament of the year that will gather together eight best CS:GO teams battling out for the $1 million prize pool between Dec. 14 and 18.

The attendee list for the upcoming contest in December is almost finalized after Heroic and G2 secured their tickets to the event following their results at BLAST Premier: Fall Final. Only two World Final spots are left to decide. And the results of the ongoing Fall Final may influence who will advance.

The remaining spots will be filled by one squad advancing from the rankings in the BLAST leaderboard and the other by the team that raises the Fall Final’s trophy on Sunday, Nov. 27. If one of the already qualified squads becomes the champion of the BLAST Premier Fall Final, the spot will be handed to the next team scoring the highest total points from the leaderboard.

OG is the sixth team in line in the rankings, with 6,300 total points scored. However, they can’t collect any more points after their early elimination from the group stage of the Fall Final.

ENCE is the next squad in the leaderboard after OG. With 5,900 points in total, they can’t score any more since they aren’t attending the BLAST Premier: Fall Final.

Team Liquid has the most points after ENCE – 5,462.5, and they can score even more after securing a spot in the Quarterfinals of the Fall Final. Another team that can compete for the chance of claiming a World Final spot is Ninjas in Pyjamas. The team’s next matchup is against NaVi on Nov. 25. They need to make it to at least the grand finals of the event to qualify.

Favorites for the Win: Team Liquid

Team Liquid is definitely one of the contenders for the first position. A top-four finish will be enough for the North American organization to guarantee a spot in the BLAST Premier: World Final.

If you are looking for a new sportsbook to place that wager with then we recommend https://gg204.bet/en-ca/.

The Final Qualifier: Ninjas in Pyjamas

The Swedish team stands a good chance of claiming that final spot to qualify for the BLAST Premier: World Final later this year. As we have mentioned earlier, NiP needs at least two victories against NaVi (Quarterfinals) and FaZe (Semifinals) to qualify for the last BLAST competition of 2023.

Sure, they need to make a Cinderella run in the next two matchups but have the potential for that considering their previous results. Many betting fans can never really rule them out, even though they still need to work on their game if they want to make it happen to the $1 million event.

The BLAST Premier World Final will run from Dec. 14 to 18 in Abu Dhabi, United Arab Emirates. It will be the last S-tier CS:GO event of 2023 and definitely an event that you don’t want to miss.

Speaking of the two spots remaining, we think of Liquid and NiP. Both squads have a chance to secure their tickets to the $1 million contest considering their decisive results at BLAST Premier: Fall Final.

Anubis card, which was added in the latest update for CS: GO, may first appear as part of the Blast Premier World Final 2023 championship. Mappul information was added to the corresponding page of the HLTV portal. Note that similar changes in the list of competitive cards have occurred with all the next championships. Nevertheless, the organizers officially have not yet submitted their plans for changes in Mappupul for the event.

Earlier, representatives of the BLAST tournament operator in a commentary for the HLTV portal reported that the upcoming Blast Premier: Fall Finals 2023 will be played on the old patce. However, the organizers did not talk about the fate of their final championship. In addition to adding Anubis’s card, other changes are probably waiting for us. In particular, in the latest update, the developers made adjustments to the AWP and M4A1-S, reducing the number of cartridges in the clip and lowering the effective range, respectively.

The Blast Premier World Final 2023 will take place from December 14 to 18 at Abu Dhabi at the Etihad Arena site. As part of the championship, eight groups of the season will fight for a total prize fund of $ 1.000,000. 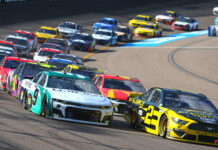 Who Is The Current Favorite To Win The NASCAR Cup Series In 2023?